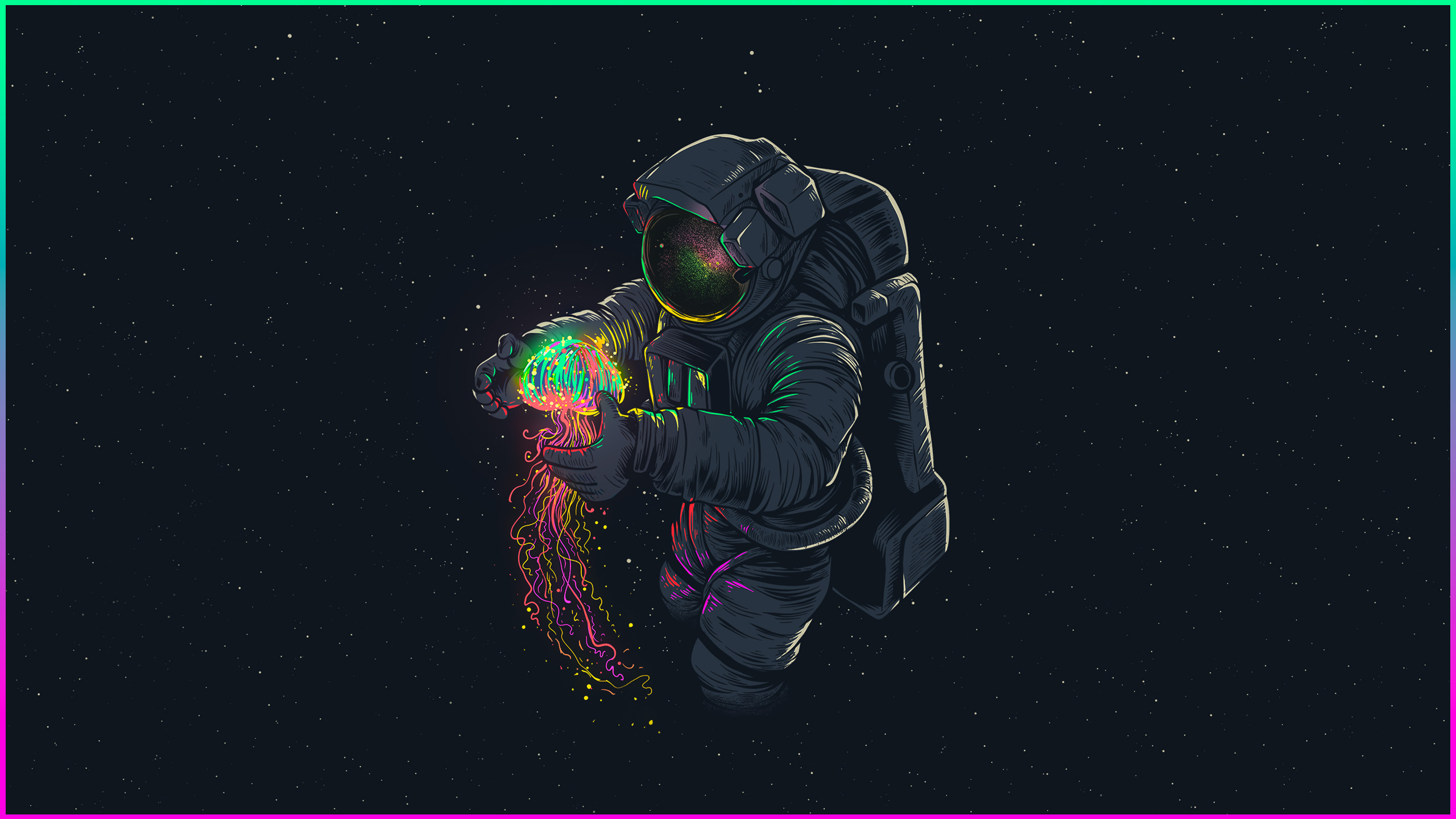 Staring out of the abyss

You know how sometimes you have these ideas just surging through your brain? And you wish there was this Willy-Wonkian dream machine you could shove your head into, to show the world your thoughts; raw, unfiltered, and perfect? Or you know how sometimes you're devoid of any original thought and you're more like a vessel than you are a person? Just empty and in autopilot? It's a challenging and burdensome dichotomy. It's also the default for most people, including myself. Harnessing the tumultuous energy of creativity is a challenge. Willing the self through a creative rut is probably more so. Overcoming these extremes and attempting a semblance of balance requires a certain level of steadfastness, dedication, and discipline.

The easiest state to default to is the vessel. The empty crucible. It's both apathy and entropy. It's the human emotional and mental equivalent to radio static. That is to say, fuzzy, irritating, and without signal. The vessel state is the beginnings - or maybe just a taste - of depression. No good things grow here. Without intervention, eventual emotional disassociation is likely, forcing those afflicted to sink deeper into a sea of fluffy disconnection. The last verse of Pink Floyd's Comfortably Numb captures the essence of residence in the depths of vesselhood:

There is no pain you are receding
A distant ship, smoke on the horizon
You are only coming through in waves
Your lips move but I can't hear what you're saying
When I was a child
I caught a fleeting glimpse
Out of the corner of my eye
I turned to look but it was gone
I cannot put my finger on it now
The child is grown
The dream is gone
I have become comfortably numb

To ebb is to recede and wane. Yet, ebbing is also indicative of potential. It's an echo of something that once was, that can be again. The foundation for expression is barren; clean, smooth, and flat. Vessels are empty, true, but they're also made to be filled. The potential to hold innovation and ingenuity is there, but it has to be mindfully cultivated.

Steadfastness and a change in perspective are the tools of cultivation; steadfastness in effort and dedication to the self. Several writers have gone on record to say that the best way to get past writer's block is to keep writing. Write anything, write everything, write what you know and write what you don't - switch perspectives, or switch projects. Do whatever you can to keep the vessel from being perpetually empty. Effort is better than crippling nothingingness. The longer the drought, the harder the break, but it is never impossible. The vessel state is easy because it is an absence. An absence of effort, an absence of connection, and an absence of vulnerability.

There is no requirement to vesselhood - merely static, inertial, uniformed inaction.

On the flip side there is the wildfire. Pure, chaotic energy - unchanneled and uncontainable. Full to bursting, yet devoid of creation. It burns only to burn. Nothing sparks, and is as instantly gratifying, as having a great idea. But whether slowly or quickly, without posessing the means to make that idea real, to create or communicate that idea, it decays. The gratification fades. Having impulses of creativity, but a lack of skill to channel them, becomes an odd form of despair. How many people have had the next great technology or the next great concerto rattling in their heads? Only to succumb; vision unrealized and incomplete. A life lived with a muted sense of unknown dissatisfaction.

And somehow we're burning the candle at both ends.

Humanity as a collective has endured specifically because of our ability to create something from nothing, to take a concept from the realm of imagination and make it material and real, to share and communicate our innermost selves through the use of external senses. Lacking the ability to perform this basic and fundamental human action is a special form of hell. A prison wildfire of our own creation.

Vulnerability is the birthplace of innovation, creativity, and change.

Or so claims professor, author, and Ted Talk storyteller extraordinaire Brené Brown. Vulnerability is necessary because there is no dream machine. There is no pure way to project our innermost selves. The process of bringing a concept through the layers of reality, from nothing to something, transforms it. It is no longer crystalline and idealized, it's been altered. It is realized; perhaps poorly. Maybe it doesn't emotionally live up to what was only imagined, and maybe it's a bad vector and facsimile for the thought. But more importantly, the idea is real. It's been put to paper, it's been sculpted, it's been prototyped. It is no longer intangible. But it's also terrifying.

By creating something and putting it on display you're showcasing two things:

But by being vulnerable, by giving a pass to criticism - ingenuity, honesty, and innovation can take shape. The wildfire can be tamed and channeled; transmuted into a forge and font of human experience.

The skeptical reader might be asking themselves, "Why would I want to be creative?". And, y'know, besides the reasons listed above, (forge and font of humanity, being a fully rounded and realized person, living a full life, and so on) both the ancient Greeks and the esteemed Vonnegut would have an answer for them.

To practice any art, no matter how well or how badly, is a way to make your soul grow. So do it.

You grow. Your soul grows. Regardless of the quality of the output, regardless of how aesthetically (dis)pleasing it might be, the end result is almost less important than the journey and pains taken to create. The very act of pouring a portion of the self into making is transcendent. Take Vonnegut's advice - do it.

The ancient Greeks had a word and concept, poiesis; or "the activity in which a person brings something into being that did not exist before." (Note that this is also the part of the etymology for the word poetry, so take that random trivia. Anyway.) The Greeks also saw the act of creation as transcendental, something beyond the temporal cycle of birth and decay, something immortalizing. American philosophers Hubert Dreyfus and Sean Dorrance Kelly build upon the Greeks and come to the following conclusion:

Meta-poiesis, as one might call it, steers between the twin dangers of the secular age: it resists nihilism by reappropriating the sacred phenomenon of physis, but cultivates the skill to resist physis in its abhorrent, fanatical form. Living well in our secular, nihilistic age, therefore, requires the higher-order skill of recognizing when to rise up as one with the ecstatic crowd and when to turn heel and walk rapidly away.

My creativity kinda sucks. Or at least the end result. But it's totally okay because I'm trying. I recently got an instax mini 90 NEO CLASSIC; a camera teeming with aesthetic energy. It's a point-and-shoot polaroid printing camera. I love it. First off, I enjoy the chemical and mechanical technomancy of a picture being printed immediately like witchcraft. But I really love the immediacy of it. I can't edit it. It's a moment in time I can't take back. I adjust my lens, frame the subject, and try to capture them from my perspective. And the film just gives the image a feeling; this retro but present emotion. I'm a sucker for nostalgia. These smudged and grainy pictures below are some of my favorites (my very favorite is one I took of my wife just chillin' on some stairs, but I don't think she wants it posted ha).

I also experimented and dabbled in producing a podcast with a good friend of mine. It's rude, crude, and downright raunchy sometimes, but honest. I edgelord more than I ever wanted to (nerves), I don't like my voice, and my jokes sometimes fall flat. I don't mind too much though, because I had a lot of fun, and it is probably something I wanna revisit in the near future. If my co-host is reading this, I love you boo-boo.

Check out my podcast, aptly named Out of Focus.

And finally this blog. This blog is so on and off. But it's a good dumping ground for me. I like to write, but I'm not diligent. I have re-read some of my past stuff expecting to cringe (it's happened), but I'm also surprised. I like what I write sometimes. And I think I'll keep doing it. Thanks for indulging me here in my (hopefully not yearly) post. I always appreciate your time.

Now go and do what Vonnegut said. Practice your art.